From the return of students and faculty to skiing outings and preparations for upcoming performing arts events, we take a photo-driven look at the past month at TASIS.

After a well-deserved Winter Holiday, boarding students returned to campus in early January and all students had their first classes of the new year on January 5.

Students returning from countries on Switzerland’s high-risk list served their 10-day quarantine comfortably at a local hotel and continued their studies remotely until they could safely return to campus for live classroom instruction.

All students—both day and boarding—were required to take a Covid-19 test before classes began. Those who tested positive were moved to an isolation center adjacent to campus until cleared by medical authorities to return. Those affected by contact tracing measures were moved to the hotel for the duration of their quarantine.

Live classes have proceeded throughout the month with a continued emphasis on the three pillars of prevention—wearing a mask, maintaining social distance, and practicing good hygiene—and with respect to the latest measures and ordinances in effect in Switzerland.

As flurries fell on the morning of January 6, snow accumulated on the palm tree outside the Del Sole dorm.

Following some independent work on grammar, students in Ms. Laura Fox’s class took turns sharing their findings on the board.

Welcome to the Jungle Gym

An Elementary School student paused to catch her breath while playing on the jungle gym during recess in the Hadsall Playground (with the iconic Casa Fleming tower in the background).

From Page to Stage

Actors in our Theater Arts class have begun rehearsing for this year’s High School Spring Play, Shakespeare’s Much Ado About Nothing.

On January 14, the sun rose over Certenago to shine light on the classic school sign.

We received some excellent news in mid-January when we learned that TASIS has officially been re-accredited by both the Council of International Schools (CIS) and the New England Association of Schools and Colleges (NEASC). This followed an exhaustive process that included a yearlong self-study and culminated with a virtual visit from evaluation teams representing CIS and NEASC in early November.

Basketball players under the age of 16 took full advantage of the opportunity to participate in organized athletics by working out with safe drills and shooting exercises on January 19.

Ms. Carol Hinchliff led a hybrid step class for underclassmen on campus and older students via Zoom on January 19.

While basking in some January sun, a group of Elementary School students lined up to braid each other’s hair.

Middle School students have begun recording their part for a collaborative school song to be shared with the community during International Week this February.

On January 22, Ms. Johanna Fishbein, TASIS’s new Director of University and College Counseling, walked a senior through a mock interview in advance of his university meeting later that week.

Weekends on the Mountain

Throughout January, members of our Middle School Ski and Snowboard Club enjoyed several beautiful days on the peaks near Splügen and Savognin.

An unexpected snowsquall didn’t stop our hardy Elementary School students from fitting in their full hour of after-school baseball on January 27.

After submitting their Theory of Knowledge papers and 4000-word Extended Essays to the International Baccalaureate® (IB) Organization, members of the TASIS IB Program gathered outside of Casa Fleming on January 28 to celebrate the culmination of many months of hard work by participating in the Jerusalema Dance Challenge, a dance craze with an uplifting beat and playful steps that has spread joy to millions worldwide. 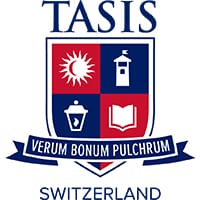 Founded by international education pioneer M. Crist Fleming in 1956, TASIS The American School in Switzerland is a day and boarding school committed to creating global citizens through education, travel, and service.

The action of working with someone to produce something

Bridging the gap: Why multiculturalism matters in international high schools