“Kö-Peter” is a recognisable figure in Düsseldorf. Despite being homeless and having very few possessions, Peter is committed to making a positive difference in the lives of other vulnerable people in the city.

At the end of last year, ISD’s Didaktische Lehrerin, Andrea Wagner, invited Peter to share his touching story with grade 8 and 9 students.

“Last year I saw a homeless man, who was on his way to a park to sleep outside on a cold winter night, when the weather forecast had announced temperatures around -10’C. He told me that he was used to these temperatures, as he had been homeless for many years. When I asked him if there was anything I could do to support him, he was modest and said that he had everything he needed, but that he only had one blanket for his dog, which might not be sufficient for the low temperatures.”

“I gave him an extra blanket and saw him disappearing in the dark. Weeks later I met him again in the park nearby. He told me that his dog had had an operation and that he had not been able to walk around to get something to eat. He never asked for anything, but received food for the dog and hot meals from the neighbours, who also invited him for breakfast and washed his clothes.”

Peter (also known as “Kö-Peter”) is well known in Düsseldorf and has been invited to speak on various TV shows about homelessness and animal welfare. Now 72 years old, Peter regularly uses his contacts to collect goods for the homeless in Düsseldorf. Remarkably, he has organised several festivities for them to share what he has collected and to give them a chance to meet and celebrate with other people in a respectful environment. More than 1,000 visitors have attended these events. 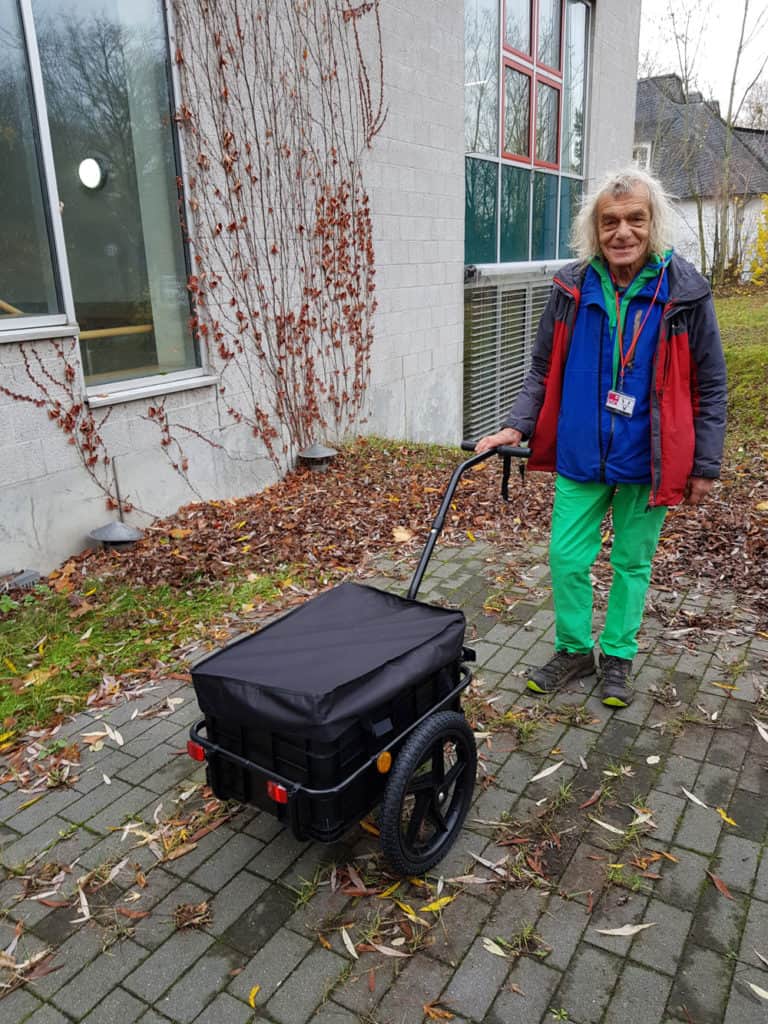 Peter impressed me because he, who does not possess anything and lives on the streets, takes care of people and animals in need. When he told me that he is often invited to speak to students, visits Kindergarten children being dressed up as Nikolaus or present at universities, I asked him if he would be willing to talk to ISD students.

In December he spoke to a group of grade 8 students, who read a short novel in their Phase 4/5 German class, in which a homeless person plays an important role helping the police to identify criminals. A group from the grade 9 German Language and Literature class also joined.

Peter spoke about his childhood, which he spent in various orphanages. His parents had given him away and he suffered tremendously from bad treatment. He has travelled the world, learned how to tailor, and used his sewing machine to make fashionable clothes. The students were very touched when he asked them to be grateful for having a family and parents who take care of them.


Here are some of the reflections the students shared with me:

“I really liked the part where he talked about the relationship with your parents, and how you should always take care of them.”

“I found it very nice that everyone who was in the room was quietly listening and not disrupting. I think it is a topic which somehow involves everyone in some way, and maybe some people shared something in common with him, like certain feelings or experiences.“

“Although it was hard for me to understand German, I could still feel his passion about helping others.”

Since his visit, Peter has been part of a WDR news program on the relationship that exists between homeless people and their dogs.

Peter will be visiting ISD again soon. He and ISD students will organise packages of toiletries to help other homeless people in Düsseldorf, following the motto “think globally – act locally”.
If you would like to support, please let us know.

The Extended Essay at ISD: Choices come with Challenges

The Best International Schools in Dusseldorf