As part of the IB Diploma Programme (DP), students are required to undertake a self-directed research project, culminating in an essay of 4,000 words. The ‘extended essay’ prepares students for the rigour of undergraduate study by equipping them with important research, writing and time management skills.
The specific topic, which can be chosen by the student, is related to one of their six DP courses. Although the topics they choose are incredibly varied, many of the students face similar challenges as they design and execute this academically demanding project.

We sat down with five grade 12 ISD students to learn about their extended essay topics, and to hear their thoughts on the challenges they encountered.

Maxi (Theatre)
Supervisor: Kate Olsson
My extended essay was about theatre. I was looking at how a particular director – in this case, Robert Wilson – uses lighting in his productions. I chose Robert Wilson because he’s well-known for the way he uses sound and lighting to create an immersive atmosphere. Also, at the same time as I was doing my extended essay, there was a show in the Düsseldorfer Schauspielhaus called ​Der​ ​Sandman – that piece was directed by him. Seeing that production definitely helped me explain his theories and concepts. My research has helped me to understand the intentions behind certain usages of lighting and sound and how these can be used to help audiences draw meaning from a theatrical piece.
I think the biggest challenge of this project was staying focused. I know from other people as well that this was a common problem for the extended essay. You’re motivated at the beginning and then other things get in the way.

Moritz (Humanities)
Supervisor: Susan Bevington
I investigated how African American athletes were involved in the civil rights movement in the US between 1960 and 1972. I’m very interested in boxing and I always admired Muhammed Ali, even before I got into boxing. As I got more into the topic I came across names like Tommie Smith and John Carlos, who were the athletes who used the black power salute during the 1968 Olympics. I thought this would be a good topic for an extended essay.
The biggest challenge was definitely time. I took a lot of time at the beginning to plan everything and undertake detailed research, but I don’t regret that time I spent planning. It helped a lot when it came to writing my essay.

Stacey (English)
Supervisor: Amy Williams / Fiona Gürtler
For my extended essay I examined how Virginia Woolf uses physical space to portray the isolation of two main characters in ​Mrs Dalloway​. Virginia Woolf wrote an essay called ​A Room of One’s Own​, where she uses the room as a metaphor for female oppression and sexuality, so that’s where I found the connection. I didn’t notice anything in particular about physical space when I first read ​Mrs Dalloway​, but as I read it again with those reflections in mind, I saw how many subtleties there were.
I didn’t begin with that topic. I had to narrow it down a bit and I think that’s something most students go through. Your question has to be very specific. I’m quite a wordy writer – I like to go off on tangents. When I first wrote my essay it was almost twice the word limit. From that point on it was a case of distilling the topic further to make it succinct and focussed. 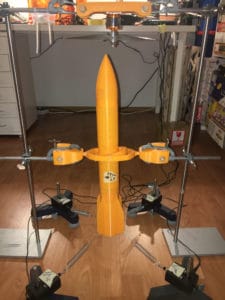 Later on I’d like to study aerospace engineering so physics was the obvious choice for my extended essay. I decided to investigate factors that influence passive rocket stability. I focussed mostly on the positions of centre of mass and pressure and how this affects the general stability of the system. The tough part was trying to figure out how to measure rocket stability. You can see that if you launch a rocket and it tumbles over, then surely that’s not stable, but how do you actually quantify that? I developed a model to mimic real life, with propellers and electric models at the top to simulate wind speed around the rocket and four sensors at the bottom that measure the tendency for it to move around.
The biggest challenge was finding the methodology that would allow me to get the data I needed. I had a general idea at the beginning of what the setup would look like, but I had to develop it along the way and solve small problems. The research part was relatively easy because there are plenty of resources available. 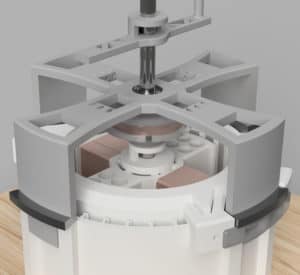 I designed and made an electric motor. It was quite a long process. I started with a horizontal rotating system, which is not ideal because gravity is acting on it, so I made all kinds of improvements until it became a good product. It really evolved, but there is still a bit to do to perfect the design. By addressing some of the motor’s ‘quality of life’ issues, I think it could be excellent.
The biggest challenge was getting started, honestly. I was just about to leave for a CAS field trip in the last week of 11t​h​ grade and I had to show that my motor worked otherwise I would have had to change my topic. So on the Friday prior, I had to change the design and print the model overnight, then spend Saturday and Sunday trying to get the motor to work. It performed well and was rotating at a moderate speed. I almost feel like when I’m under stress I produce a better quality of work.

Preparing today’s young people for the challenges of tomorrow