From February 28 to March 2, Institut Montana Zugerberg students travelled to Berlin to partake in the BERMUN2 Conference to debate on the theme of “Advancing Climate Action: The Key to a Sustainable Future.”

Schools from all over the world participated which increased the internationalism that is the Model United Nations. 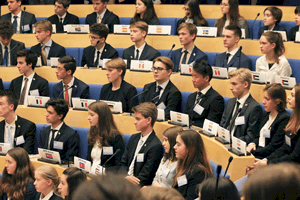 The Model United Nations is a school club that allows for students to simulate debates from the United Nations based on a given topic. Students are able to increase their debating, communication and critical thinking during such events and conferences which will them for university and beyond.

One of Institut Montana’s students, Lloyd Weber, was the Assistant President of the ECOSOC and hopes to be the chair for the main conference to be held later this year in November.

Read more here to learn more about what happened and what was discussed during the BERMUN2 Conference.

School Holidays in Germany in 2019

School Holidays in South Korea in 2019

School Holidays in Kenya in 2019

MUN: A Simulation of the United Nations for Brillantmont Students

STEAM courses at Brillantmont: what 2019/20 has in store