The now-defunct National Southwestern Associated University or Lianda is considered a “miracle” in the history of Chinese education. The institution was formed by the Xiansheng (“teacher”), or the community of teachers and students from the Peking University, Tsinghua University, and Nankai University that retreated to Kunming during the Japanese occupation of China in 1937. Lianda survived dire wartime circumstances in its eight years of existence and brought forth some of China’s prominent academics and Nobel laureates.

Eighty years on and the light that guided Lianda has never faded. Student thespians from the Keystone Secondary School (SS) take inspiration from the remarkable story of Lianda to deliver Xiansheng, an original drama reliving the glory days of these revered intellectuals. This semester-end production is the SS’s biggest as of yet, with 41 students from Grades 8 to 11 forming the Xiansheng Chinese Drama Troupe to work on all aspects of this play. Their performances were held on the evenings of December 11-13 at the Performing Arts Center (PAC). 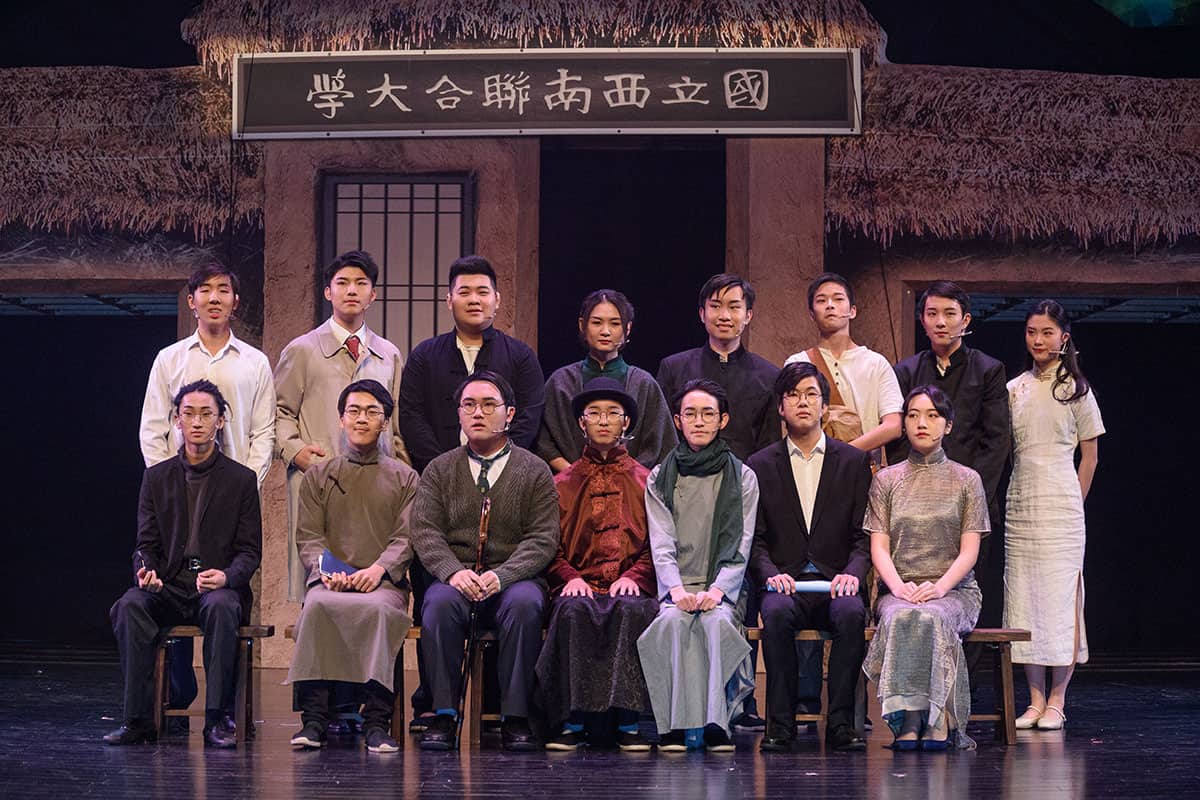 The Journey of the Xiansheng
The drama opens with a scene of an older woman who shares with two university students a story of Lianda. The scene goes to Act 1, in the war-era China, during the journey to Kunming of the Xiansheng, after they formed the National Changsha Provisional University. Along the way, the students reflect on their pursuit of education amid the war. The older teachers remind them that “the war will not last forever.” Once they reached Kunming, the community faced a shortage of supplies and materials, but still established the National Southwest Associated University, or Lianda. The scene ends with a photo of the community taken in front of the university façade.

In Act 2, war takes its toll on the younger members of the Lianda community, as they mull over joining the army. On the sidelines, women raise the question of their role in society, especially in times of conflict. The Xiansheng turn to classical literature to enlighten the students. While the community relishes in moments of catharsis, sporadic bombing takes place and changes the course of action of several characters. Some students join the army while others continue their academic pursuits.

Characters examine their choices and contemplate the capacity of human emotions to trump adversity in Act 3. The teachers also speak about the benefits of education and how it becomes the “weapon” of the youth. In one fatal and destructive bombing incident, characters deliver a powerful take on the meaning of courage and how it manifests differently in people. As the war ends, the surviving communities of Xiansheng return to their respective universities and take a final photo in front of Lianda’s façade. The scene returns to the present day, as the professor reminisces about the photo of the Xiansheng and reveals herself to be part of the community.

The Generation of Keystone Thespians
Every year since 2016, Keystone’s Chinese drama productions have been crowd-pullers and set the bar high for student-led plays. Last year’s performance of Junzi received rave reviews for its grand and elaborate ending scene.
Indeed, there is pressure for first-time actors and production staff of Xiansheng, but some “veteran” student thespians assisted newcomers. It is a fascinating tradition in the student-led plays at Keystone: it is collaboration in action as senior students pass on production wisdom and technical skills to younger peers. This inspires a newer generation of talents to keep Keystone’s Chinese dramas always fresh and more exciting.
Behind the productions, Chinese teachers Pei Lu and Haiyan Li and Director of Libraries Kacy Song kept everything together, with their expert supervision that unleashes the talents of students on and off stage. They have backed up the young performers and watched them grow to become actors themselves.

The idea for this year’s play came from Kacy Song, during one of the pre-production days of Junzi in 2018. Her concept centered on the inspirational story of Lianda, but it was the then-ninth-grader Iris Zhang who refined the story.
That time, the student had just finished the script for Junzi. She composed a different play, Kang Youwei Jinyu, which did not reach the stage. This setback, however, allowed the young playwright to reflect on her writing. Pei Lu presented her Lianda concept to Iris sometime in late 2018. Fortunately, the student already knew more about the famed university. It took Iris only three days during the summer break to write Xiansheng. She spent the remaining vacation time working with Pei Lu on finetuning the historical details of the script.
“She researched into two events: the retreat of the Xiansheng from Changsha to Kunming and anecdotes about the students who joined the Chinese army. Do not dare ask Iris about China’s history from 1937 to 1945; she can go on for three hours without drinking water!” Pei Lu said with a smile. 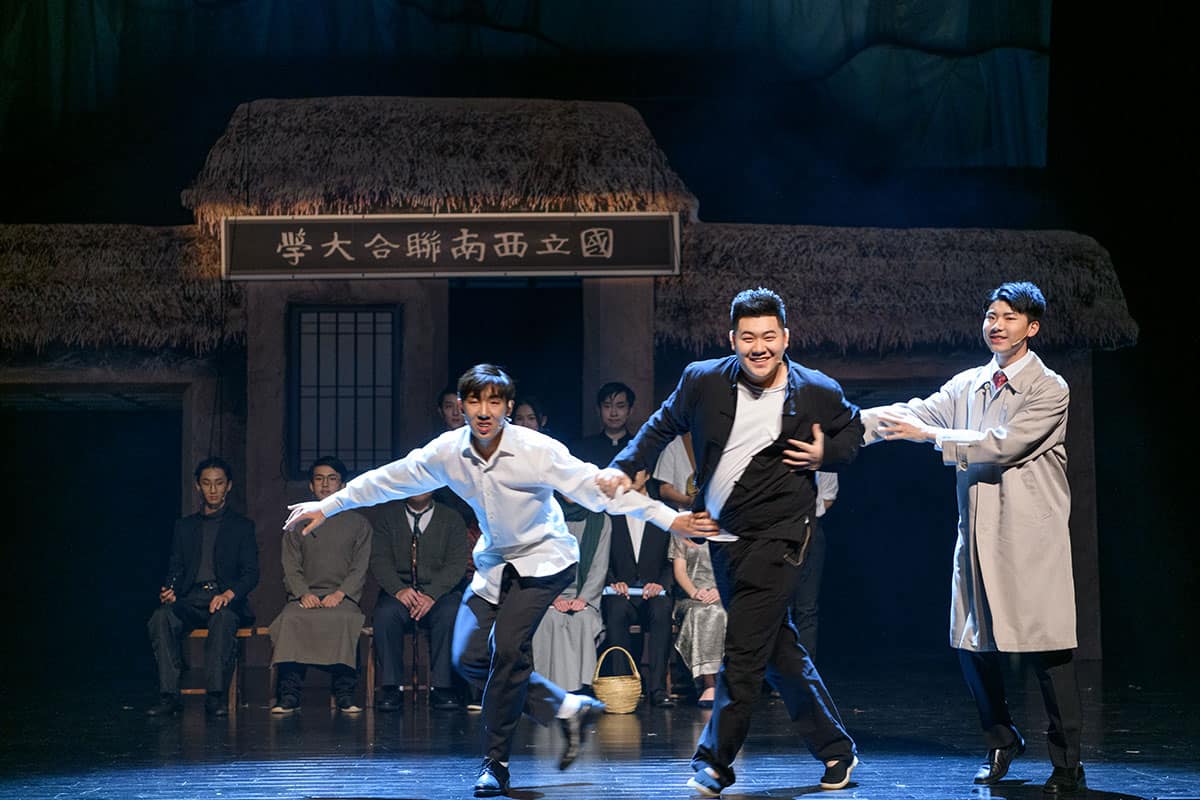 Born for the Role
When Iris Zhang finished the script in July, it took three months for the Xiansheng Chinese Drama Troupe to build the entire production, from creating the core team to casting calls to designing the props and costume to rehearsing.

The troupe explored dual roles in Xiansheng, employing the concept in the main characters, Wen Yiduo and Shen Congwen. Eleventh-grader Andrew Li and tenth-grader Jack Li played the roles, but with different interpretations. Both boys were moved by the stories of these renowned poets in modern Chinese literature and wowed the producers during their audition. In the end, the two Lis got the coveted roles and played them on different nights.
The fictional character of Shu Jin connected the audience to the events happening on stage. She was depicted in two phases of her life: the present-day university professor who recounted the scenes of Xiansheng and her younger, revolutionary self who saved over thousands of soldiers during the war. Eighth-grader Isabella Zeng, the youngest actor in the cast, said she channeled the historical character Hua Mulan to act out the younger Shu Jin. The role’s understudy, Marie Liu, prepared for the role by watching documentaries and observing women at the time.
Iris Zhang created another character, Zhao Chunying, a spirited girl who sold “victory cakes” with her grandmother. Several students auditioned for the role, but Iris and director George Qiao required a candidate who speaks the Yunnanese dialect. The part went to eighth-grader and Yunnan native Suri Jia, who surprised everyone with her strong stage presence and emotional connection to the fictional character, as if she was born for the role.

When the troupe proceeded to the rehearsals, Classroom 1358 became their “fixed” base every Tuesday and Thursday afternoon. In one session that the Communications Team visited, we saw director George Qiao hands-on and portraying the roles himself.

“When presenting this line,” George said to one actor with gusto, “You can walk like this,” strutting forward before stepping back. “It will release your emotions and deliver them to your audience on both sides.”

With his precise explanations and vigorous instructions, the eleventh-grader seemed to have been doing the role for a long time. But Xiansheng was his directorial debut; he tapped into his experiences as a lead actor in previous Keystone student productions, including the English play Kingdom Island.
“It [Kingdom Island] helped me in my role as a director in Xiansheng, especially whether it’s guiding actors or getting an overall grasp of the drama. Before the rehearsals, for example, I will form groups so the cast could build rapport. When actors find it hard to express emotions, I will lead games to prep them up,” George said.
Pei Lu noted the “astounding professionalism” in the way George directed Xiansheng. She noticed the young cast initially had trouble portraying older roles, but George devised acting strategies and spent more time with actors to assist them. This earned him the admiration of his cast and crew, who endearingly called him “Qiao Dao” (Director Qiao). 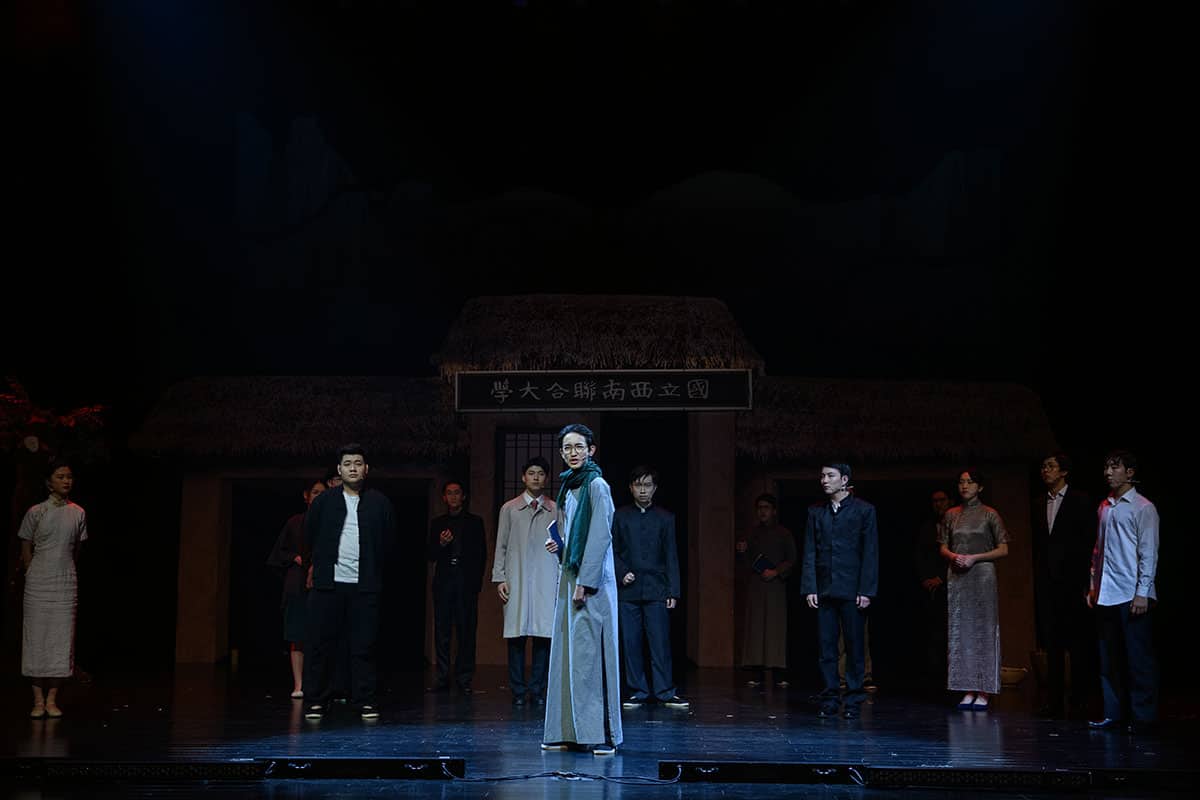 Keeping It Accurate
In the three months leading up to the premiere, the Xiansheng Chinese Drama Troupe squeezed the requirements of the show’s production values in the hustle of their regular student schedule. The finished products—from the costume to the marketing materials to the stage design—showed their dedication to keeping Xiansheng historically accurate, despite being an original work.
Grade 11 student Symone Liu put a lot of thought into designing costumes, matching them with the personality of their characters since the characters lived in a period of war when people wore almost similar attires. She also designed the set, a two-level foreground stage that gave an illusion of distance. Prop designer Amy Yin wrote down the instructions of director George Qiao to outline the scenes and provide actors with visual reminders.

Student producers Alisa He and Rita Yang organized the promotional photography and trailer production. Like in real-life productions, they both faced last-minute issues that challenged their project management and on-the-spot decision-making skills. In one instance after a photoshoot, Rita realized a piece of costume was missing. Before she took the matter to WeChat, she ran through her inventory list and found out the lost item, pronto. Alisa, on the other hand, had her plan and props ready for the trailer shoot but found out they could not be set up on campus. In the end, she found a studio and made a makeshift table to complete the shoot. 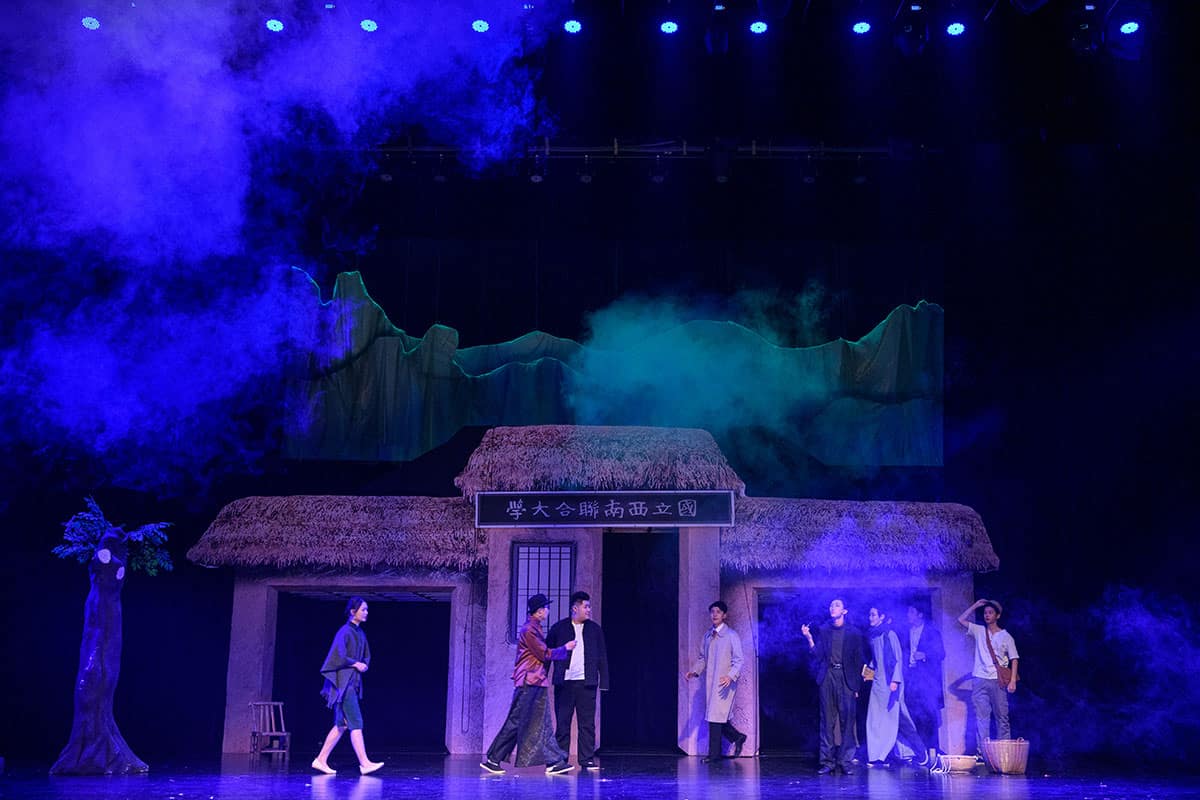 Connecting Determination
We caught up with some cast members just an hour before their last performance on Friday (December 13). In the dressing room, the aura was very light, as if the students were preparing for a prom performance. They were even helping to fix each other’s hair and makeup.

When we asked George about what he was feeling at the time, he said he was “calm but passionate.” The co-actors were as confident as him. On the other hand, Iris, who just finished styling her hair, told us she did not have big feelings, but “might cry after the show.”

The epilogue of Xiansheng, the powerful photo-taking scene in front of the Lianda façade, evoked deep melancholy and made several audience members emotional. It was the brainchild of Iris, who did not realize that the meaning of such a passionate ending would transcend the language barrier.
“I wanted to convey this connection between different times. The Chinese audience understood it. But on the day after our first show, our foreign teachers told me that the last scene almost made them cry. They also felt the message,” Iris said.

Another theme that George endeavored to convey was the power of determination, regardless of gender and social status.
“People in that era who did not have power put their spirit into education. Just like soldiers on the frontlines, teachers were also taking pressure from society whether or not they were raising a generation of upright citizens. That in itself takes a lot of determination.”
Many people who watched Xiansheng commended the student cast for a striking show. Some of them even asked Iris if there would be another performance. “We didn’t have the preparation before,” she referred to the previous Chinese drama productions, “But we are considering presenting Xiansheng outside of school.”
“Thank you for supporting our theater show at Keystone and supporting this program,” George said. “Please cherish this sense of passion because it’s found in our daily lives. It’s a remarkable experience!” 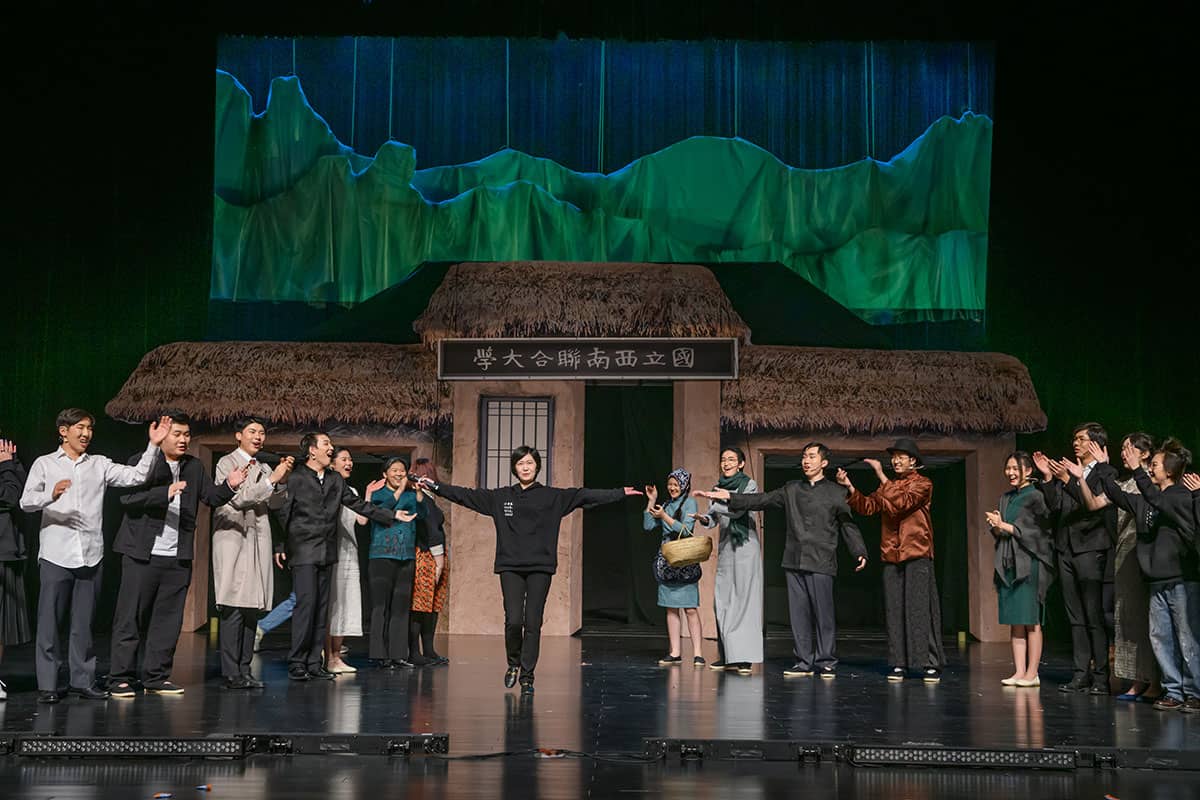