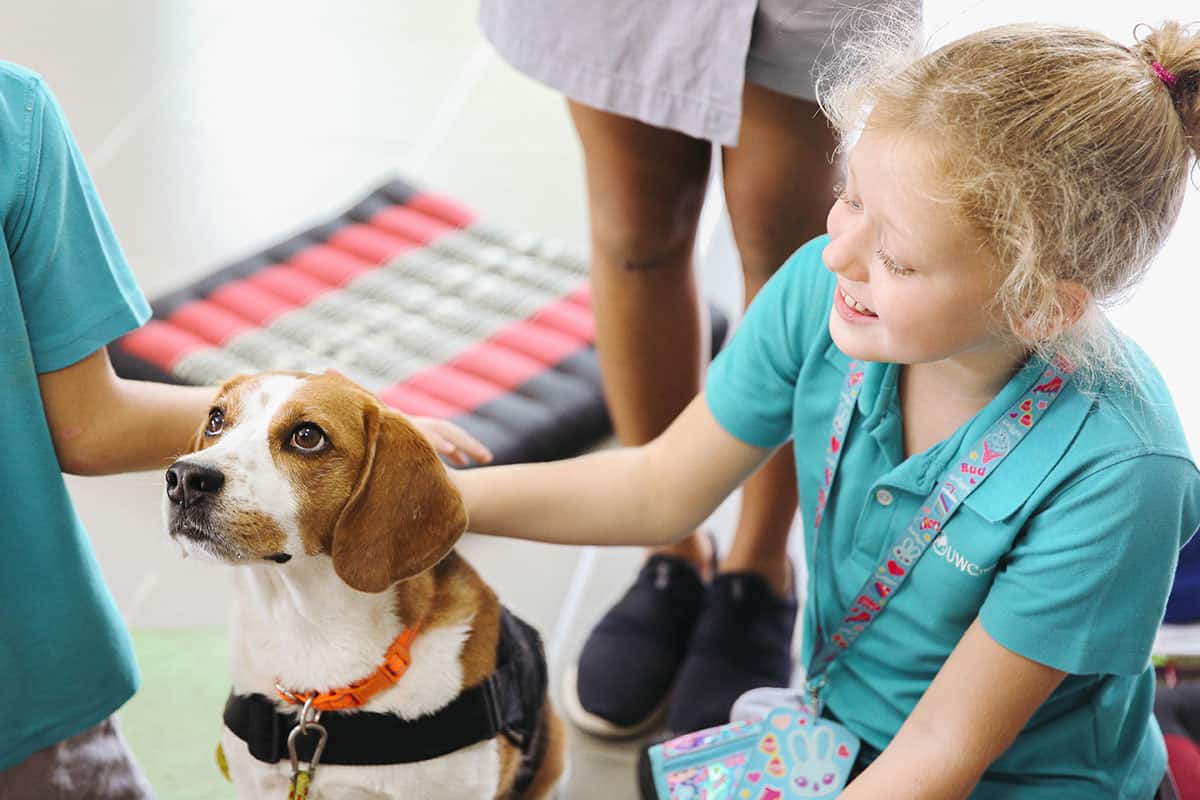 “We did not know it at the time but the massive improvement in air quality has had an incredible impact. My husband was wheezing and using inhalers in Hong Kong and you could hear my kids breathing much heavier at night there. Here we don’t ever seem to have any issues—no inhalers necessary. I don’t think any of us have even had a common cold since we have been here.”
– Angela Ward 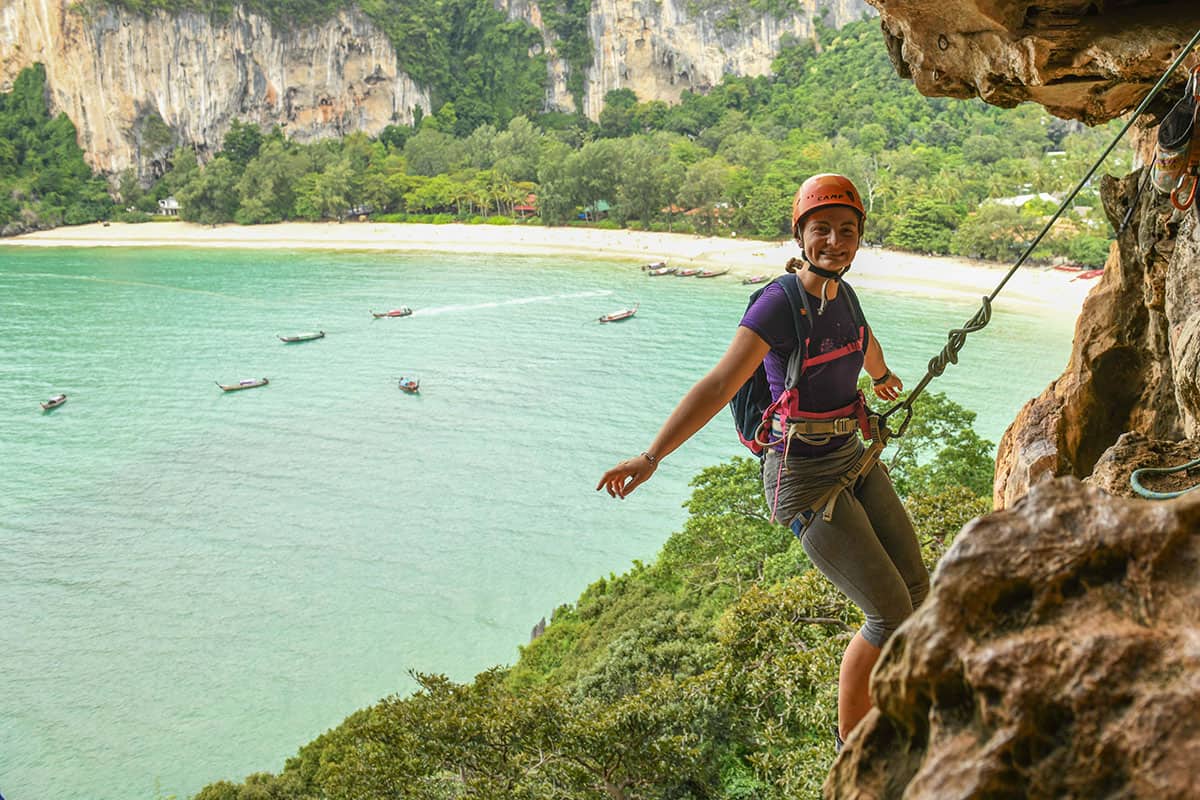 “I don’t think there’s a schools like this in Hong Kong. Parents can swim in the 50m pool, go to the gym, have lunch … watch their kids swimming in a nice environment.”
– Bettina Farrimond 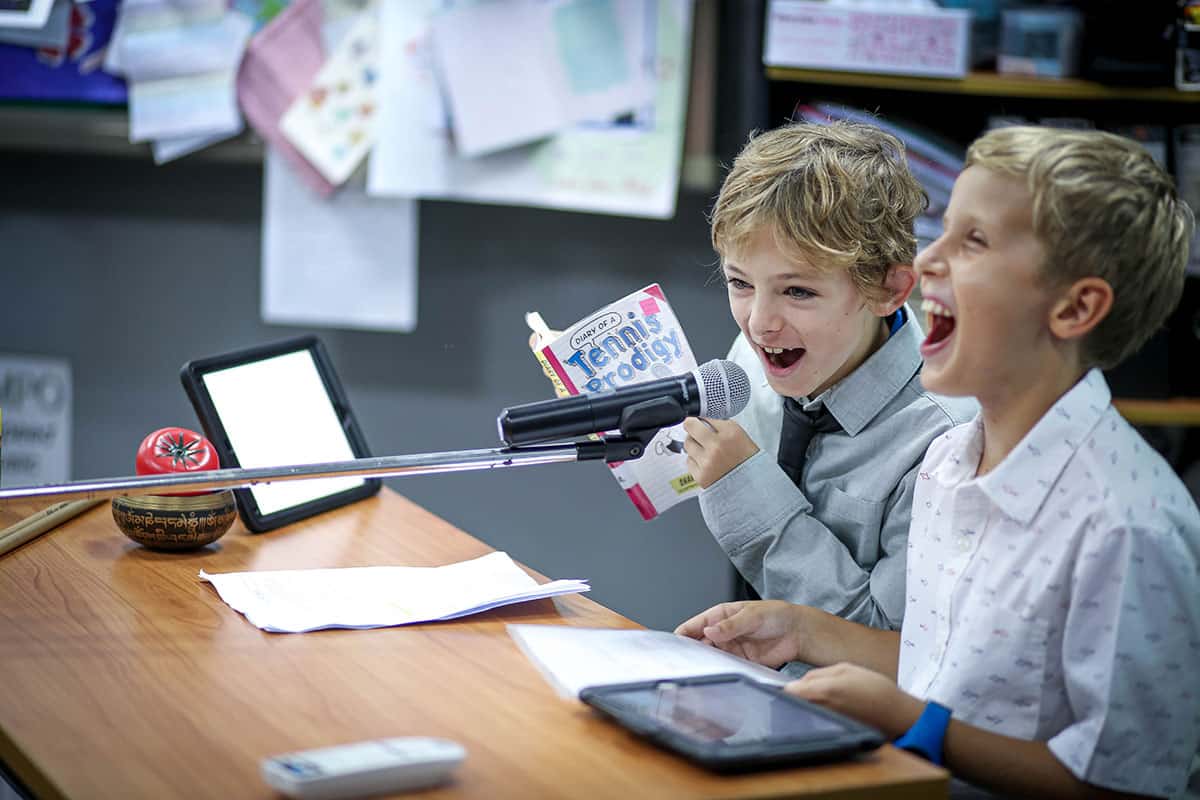 “The pace of life is slower and calmer, there is far less competitive tension and little to be stressed about, the air is clean, we have ample opportunity to spend time outdoors with our kids. Fresh fruits and vegetables are bountiful, delicious and cheap.”
– Benjamin and Denise Gilmartin

Angela Ward dreamed of more space. With three young kids and a start-up business, her Discovery Bay rental home was maxed out. Ward, a Canadian expat, and her Dutch husband, Boudewijn van Heezik run Jobs 4 Pilots, a recruitment company for the Asian aviation sector. When her landlord decided to sell their rental house, they found themselves struggling to find a new home. “When we saw what was on offer in Discovery Bay and for the amounts being asked, we started to look a little further, ” says Ward. A particularly bad stretch of air quality sealed the deal. “The family was constantly fighting colds and breathing issues. Friends had recently decided to make the move to United World College Thailand (UWCT) and convinced us to come have a look.” Ten months later, her family is happily settled on the island. “Being based in Phuket allows us to run our business and has our family feeling more in balance.” Now Ward finds herself recommending the move to others who want to reduce costs, increase living space, lead a healthier life, and give their children a unique education.

Nestled between the jungle-covered hills of a national park and acres of rubber plantations, UWCT is a breath of fresh air for families used to hectic and cramped city life. The greenspace was one of the big attractions for Benjamin and Denise Gilmartin, who left Hong Kong three years ago. “Everywhere we’d send our kids to school [in Hong Kong], they’d have to play football in an enclosed gym. We did everything at the YWCA, where there’s no windows. You can’t see anything green. There’s just so little outdoor space.” At UWCT, students walk outdoors to get to the cafeteria, the library, the gymnasium. They run around and climb aboard the “pirate ship”, a large bamboo play structure in the middle of the campus. Denise says it speaks to the UWCT culture. 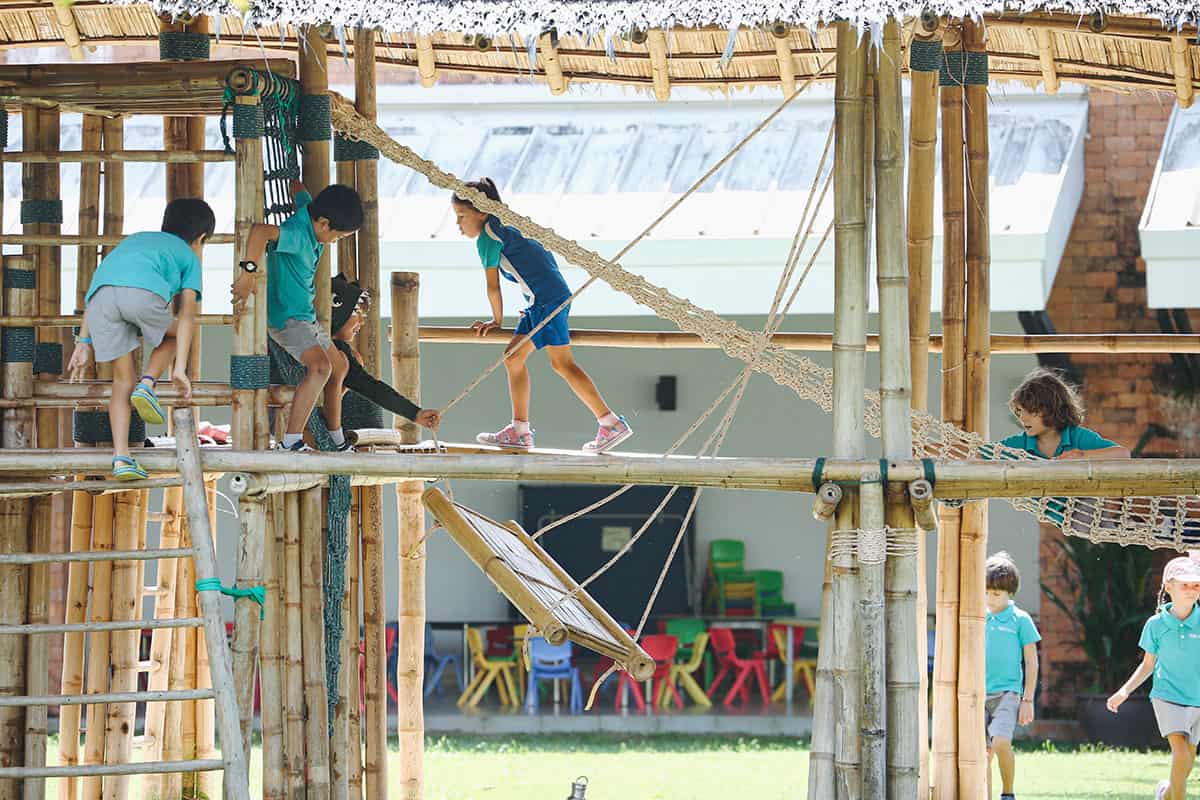 “It [the pirate ship] embodies that risk-taking atmosphere and that freedom to give kids the ability to fall down and do stuff without a million nets around.”
– Denise Gilmartin

The Gilmartins were actively looking for a new place to call home when they found UWCT. As their daughters, Lexi (now 7) and Tess (now 5) got older, their fast-paced Hong Kong finance jobs became less attractive. “When you’re young, it’s fun and stimulating and exciting but the more senior you get, the more political it is … it was getting to the point where it was unbearable,” says Denise, who grew up in Hong Kong and California. “So we didn’t want to do those jobs anymore, and then it didn’t make sense to live in Hong Kong because it just costs too much money.” Plus, they wanted their daughters to have a calmer, less stressful and more playful childhood. “We were struggling to find a school in Hong Kong that offered the type of progressive education we were looking for.” They were intrigued when they found UWCT (then PIA).

Built on the foundation of the International Baccalaureate programme, the school aims to help students ages 2-18 years develop a “Good Heart, Balanced Mind, and Healthy Body”. As part of the United World College family, an international network of 18 schools, it shares the mission of making education a force to unite people, nations and cultures for peace and a sustainable future. Over 60 diploma level scholarship students from around the world call the school home for two years, studying, sharing and training to become the next generation of global leaders. Denise notices the difference those students bring to the campus. “I love the community of students. The bigger kids get involved with the little kids. The secondary kids come into nursery and have this personal connection. You have kids of different ages integrating well and playing well together.” Ben adds, “They also just appear happy. You go to schools in other places and kids appear extremely unhappy. Our girls at the end of the summer say ‘when are we going back?’ ”

The Gilmartins attribute that enthusiasm to the school’s success in fostering a real love of learning and developing the holistic child. “We liked that the school was strong academically, despite academics not being its sole focus, the fact that social emotional learning and mindfulness was a key pillar in their educational approach,” says Ben.

Months after their daughters started at the school, they saw that key pillar in action with Lexi, then four and a half years old. Denise remembers the moment vividly. “We had started learning this exercise—just five slow, deep breaths if you feel like you need to calm down. Lexi was really tired and having a complete meltdown. I was like, ok, I don’t think this will work, but let’s practice. And we took five deep breaths and she calmed down. I was floored. I did not expect it to work. When she had melted down previously nothing could calm this kid down. I was really amazed.”

“All of these factors are important in molding our children to be kind human beings, to be adaptable, critical thinkers, to be ready to take on the challenges that will be thrown at them in a rapidly changing world” add Ben and Denise.

Bettina Farrimond discovered UWCT’s unique approach to learning much earlier on. Eight years ago, she and her husband Sam moved their family of four kids to Phuket. While reducing costs and living a healthier lifestyle were factors, the school and its inquiry-based IB programme was the main draw. 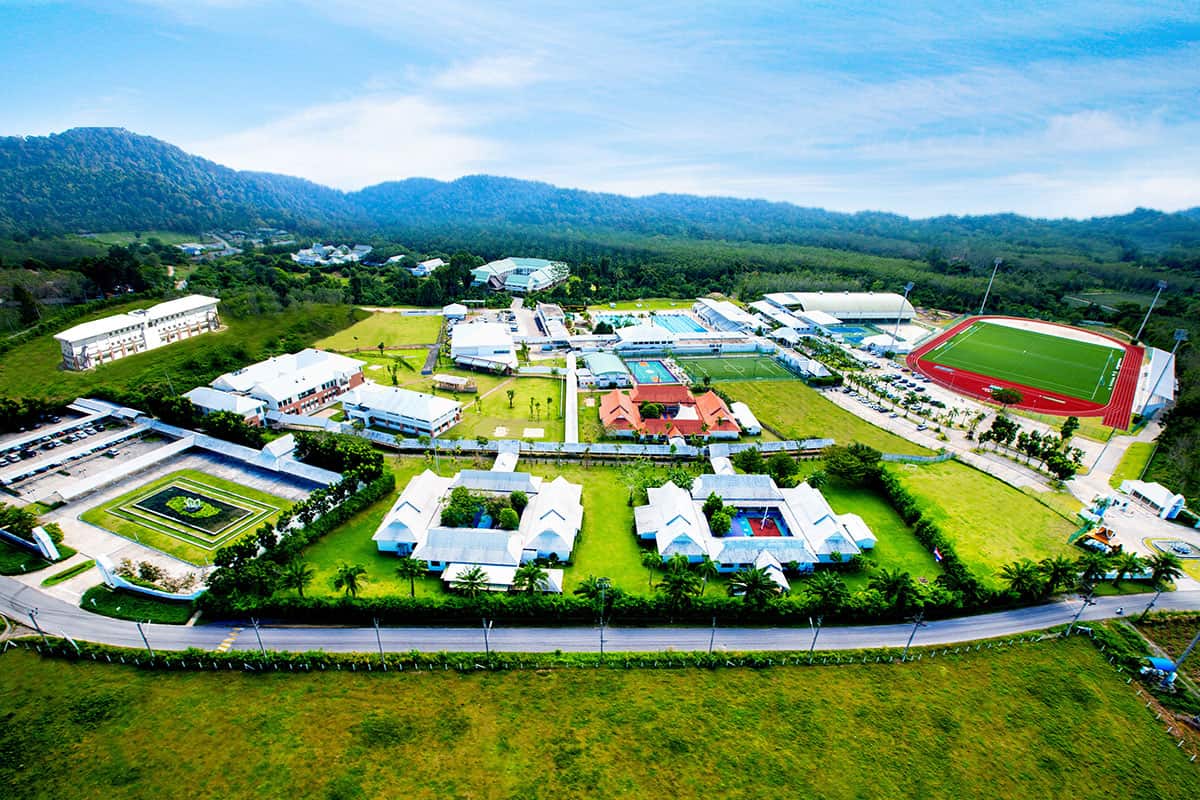 UWC Thailand and neighbouring Thanyapura Health & Sport Resort are nestled in the foothills of a National Park.

“I’m German, and I want my kids to be able to go to European universities if they want. The IB programme is best suited for that,” says Farrimond. “I think that the students have very good chances to get into good universities and get scholarships. ”And while the academics matter, Farrimond also appreciates the quality of life they have in Phuket, especially since they live close to UWCT. Her kids can bike or walk to school on their own, and she thinks living a quieter island life is helping them enjoy childhood longer. “If I compare Finlo (age 14) to his friends in Hong Kong, he doesn’t need to show off. The acceptance is fantastic here. There’s no bullying.” Farrimond’s daughter, Zoe, is 12 now and still not into makeup like her friends in Hong Kong. “There’s no pressure to do anything like that. In Hong Kong schools, at 13 everyone has a boyfriend. I don’t have a problem with it, but I prefer if [it happens] a bit later.”

Angela Ward, who moved to Phuket most recently, admits that it took awhile to make the adjustment from their larger, slick, academically-driven Hong Kong school to the more intimate UWCT experience. “You don’t understand the differences that matter at first,” she says, but she knew they couldn’t go wrong with smaller class sizes and more individual attention. She praises how thoughtfully UWCT handled the mid-year transition and placement for all three of her children and how “that’s more valuable than a stack of ipads”. Ward has also come to appreciate the welcoming campus, noting how all of the school administrators station themselves at different points on campus to greet families at the beginning of the school day. “I get the feeling that they seem to be more at ease in this environment,” says Ward. “It’s a more relaxed, boutique experience, which is what I think kids need at this age.”

And then there are the unexpected benefits. “We did not know it at the time but the massive improvement in air quality has had an incredible impact. My husband was wheezing and using inhalers in Hong Kong and you could hear my kids breathing much heavier at night there. Here we don’t ever seem to have any issues—no inhalers necessary. I don’t think any of us have even had a common cold since we have been here.”

Having access to Thanyapura, a world class health and wellness centre connected to the school, helps on the good health front. Parents get a free membership as part of the UWCT package. Beyond good health, the move has brought positive changes to all the families. Ward notes that as an entrepreneur, reducing costs and increasing living space is a no brainer, but there’s also getting to spend more quality time with her kids at school and at home. “Hong Kong is so helper-driven. You get sucked into that. There were more helpers picking up or dropping off in Hong Kong than parents, even though the balance of the parents working/not working is pretty much the same. Here,” notes Ward, “people take their children to school. You go to these assemblies and you can actually see what the messages of the school are, you can talk about it at home. That’s pretty unique.”

For the Gilmartins, moving to Phuket allowed them to achieve their goal of leaving their Hong Kong finance careers. Laughing, they describe themselves as frugal, but they’ve saved enough to live off investments, freeing up lots of time to spend with their kids, and help the school grow as active members of the Parent Support Group. “Phuket has given us the space (literally and figuratively) to live healthier lives.” 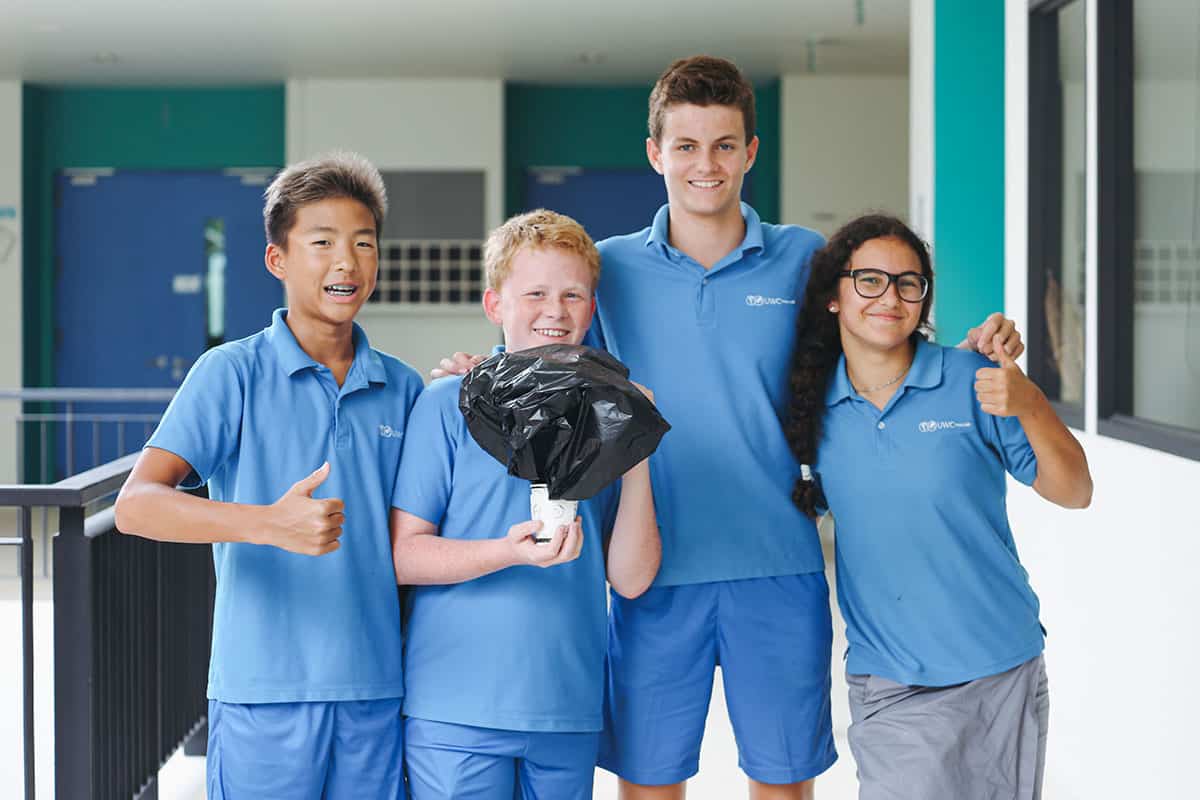 World Education Week: UWC the only Thai School to Rank in the Top 100

The Best Boarding Schools in Phuket

Looking back 2018-19: BISP Saving the Environment