Keystone Students Explore Learning Outside of the Classroom
Over the breezy coast of Beidahe, some four hours away from Beijing by drive, eighth-graders from Keystone Academy set up a three-day camp for their Outdoor Education Program (OEP). In one watersports activity, five students took a ride on a sailboat relaxed and cheery.

When the boat moved sideways, one of the students fell out of balance, causing the vessel to overturn. The teens panicked as they all fell into the sea, despite wearing lifejackets and being accompanied by a lifeguard.

After the passengers climbed back onto the boat, Alex, one of the students, chanted an anthem.

He says, “Over the wind and the waves, endure the pain.
Dry your tears, don’t be afraid, at least we still have our dreams.”

The passengers altogether sang “Sailor” as they headed back to the shore and brought with them not regrets but an invaluable life experience.

“That’s the sort of experience that we want kids to go through,” said Chris Cartwright, Keystone Academy’s Director of Experiential Learning. “And that student singing an anthem, that’s when these little gems that you come away with the thought, ‘Wow, this does really work!” 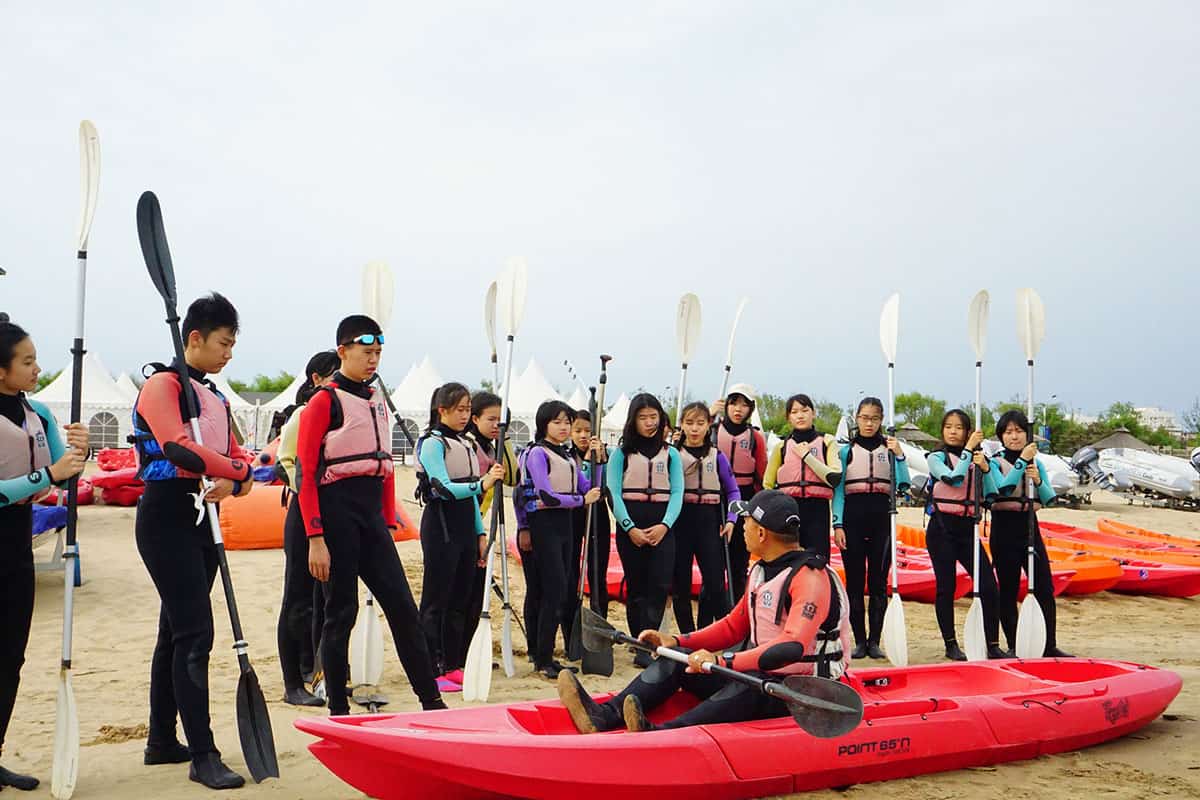 The OEP is an important component of Keystone Academy’s academic framework of experiential learning, or in other words, “learning by doing”. In the first three weeks of September 2019, the OEP brought students from various grade levels to different environments in the perimeter of Beijing all the way to Inner Mongolia.

A ‘Structured Playground’
The roots of “learning by doing” has existed since the time of Plato and Confucius. But it wasn’t until the early 20th century that American philosopher John Dewey and German educator Kurt Hahn emphasized the ways direct experience impacts learning. Their principles have paved the way to an educational philosophy that is known today as “experiential learning”.

Keystone sees experiential learning as instrumental to the concept and realization of a world school. Up until 2018, the OEP was called the Experiential Learning Program (ELP) that had immersed students in the diversity and richness of China through class trips and community service learning programs.

In 2018, Cartwright reviewed previous ELP activities and talked to Beijing-based institutions that offer experiential learning trips to develop a new set of programs that “are greater in depth, width, and height, with multi-dimensional developmental objectives and progression.” The result was the current Outdoor Experiential Program (OEP), but it was not only a change of name.

“Rather it be just camping, a team building, a sort of fun bonding activity, our OEPs all now have themes and are linked into the three keystones and our five shared values,” he explained.

Cartwright and other educators on-site observed and supported the activities while the students were in action.

Over in the Yudao Riverside, Keystone fifth-graders formed tribes to play a “Civilization Game” where they learned basic survival skills. In one tribe, the youngsters prepared ink from melted charcoal and painted a welcome sign on the faces of visitors. In another tribe, members collected and stored millipedes into empty water bottles and used them as a barter currency to exchange for other items such as wood and strings. 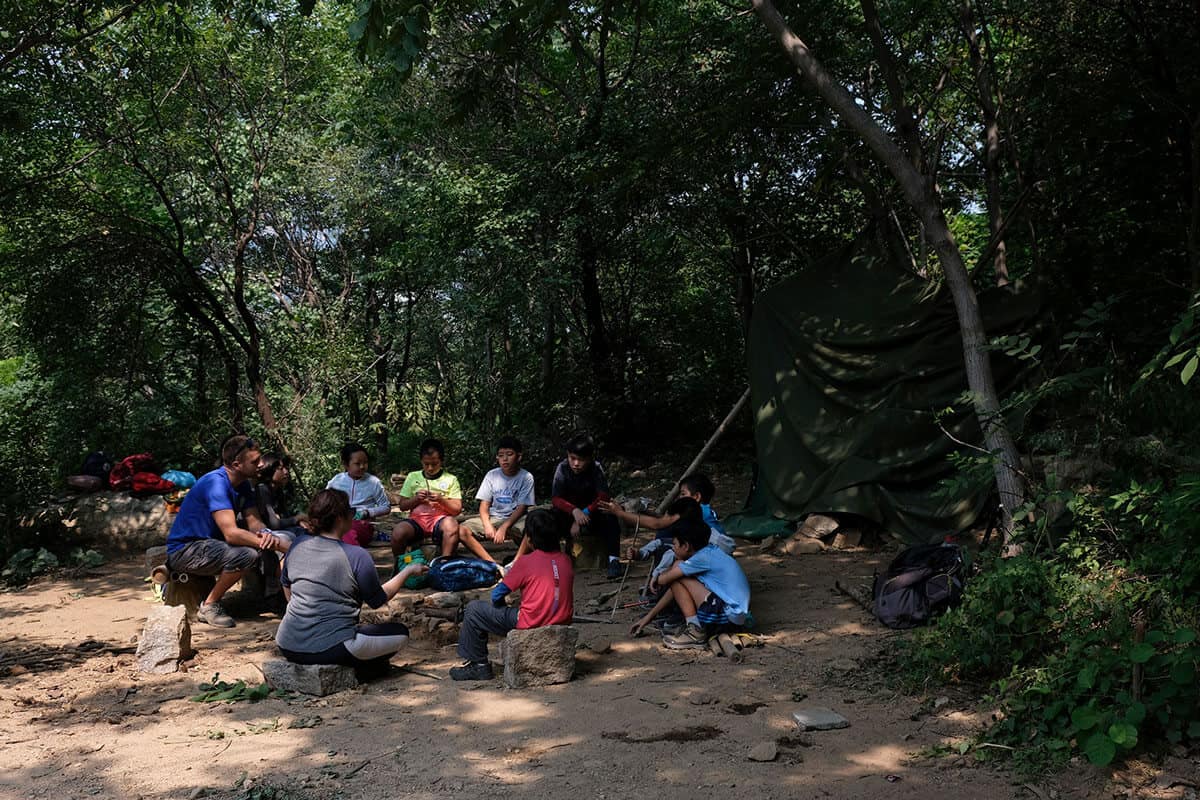 “Tribal Council”: A tribe of Keystone fifth-graders discusses how to create fire for lunch

“I saw an energy level that you don’t really see when you’re giving students something to do,” Grade 5 English teacher Aissa Quesada said. “Being outside with nature and not having teachers or adults run the program for you seems to be a way to get kids to participate more energetically.”

One pupil, Wesley, accidentally wedged one of his fingers into a knot his tribe was tying for their raft. Although he silently sobbed on the side, the boy eventually returned to his tribemates.

“I felt happy and excited when we finished building the raft. I knew we would be getting into the water, but the girls were ‘Hahhhh!’,” he said, trying to mimic the animated shrieks of his tribemates.

“Humans are inextricably linked with the world around us; we are part of the web,” Cartwright said. “The OEP is like a structured playground where our students are allowed to experience the fun and the joy of the opportunity to go outside.” 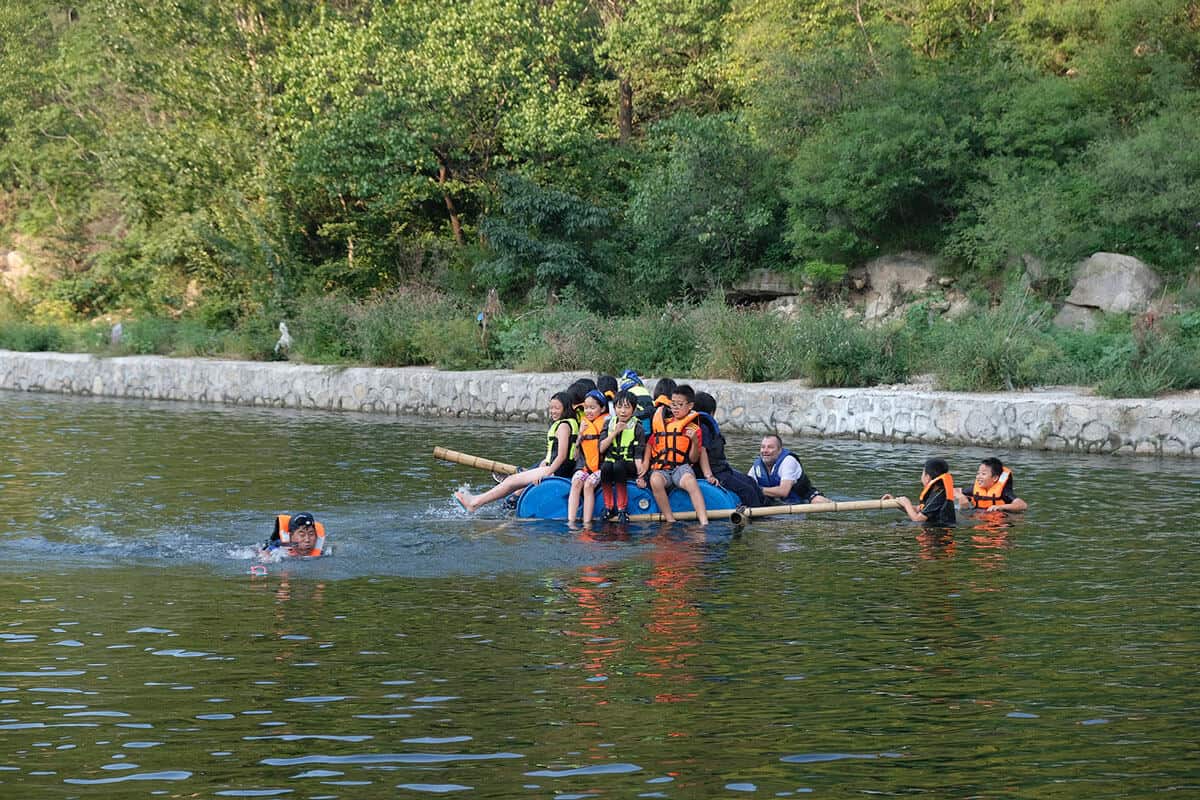 Realizing the Benefits of Experiential Learning
It is not only the life skills that the OEP is aiming to achieve. Cartwright said the program strives to help older students discover their identities, something that will prove crucial in their future.

Tenth graders, for example, had a more physically demanding OEP in which they biked for 100 kilometers for three days along the mountain trail near the city of Zhangjiakou in Hebei Province. Grade 11 students traveled further north to Inner Mongolia for a six-day cultural exploration to understand how increasing digitalization and climate change impact the way of life in rural villages there. 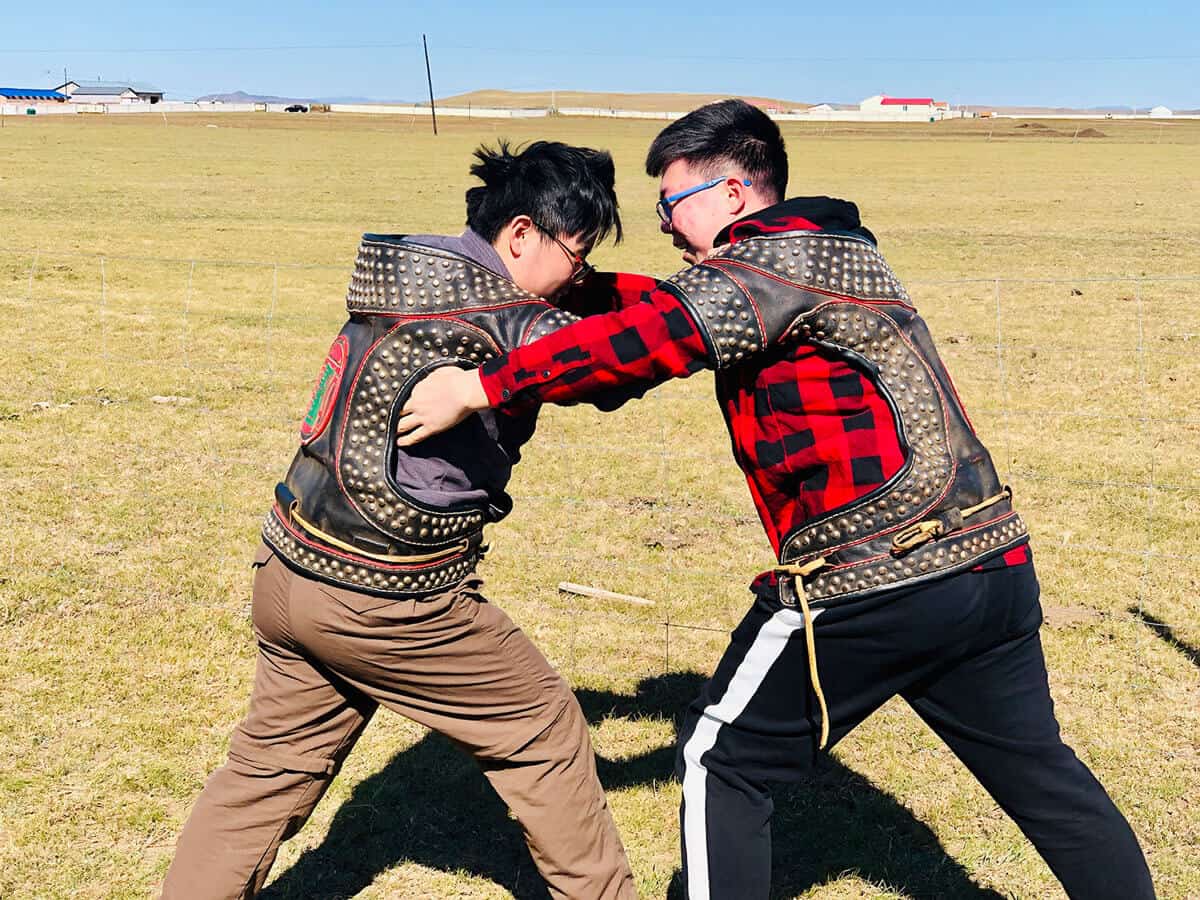 Grade 11 students play bökh, or Mongolian wrestling as part of their cultural activities in Inner Mongolia

It is in these moments outside of the classroom that students are able to magnify their emotional intelligence that make for standout stories and experiences.

“During the various challenges in the OEP, students are not only gaining experience but also becoming more courageous in their pursuit of exploring the world. Growth occurs at the moment when a challenge is completed” Chinese language and literature teacher Cao Shujuan said.

Cartwright added that while some changes in the students, such as communication skills and self-esteem, can manifest immediately after such kinds of trips, there is a “huge amount of learning that we don’t see” as students realize the full benefits later in life.

Back to Beidahe, it wasn’t only Alex’s team that had a story to share. Other students reflected on their vivid recollections of their adventures. As they returned to Beijing, students brought with them memories that would be the conversation piece in the weeks to come.

“Previously, we camped in the mountains and engaged in activities in the forest. This year at Beidahe, we formed a connection with the sea. We walked out of the hustle and bustle of the city, from structures made of concrete, and returned to nature. It is one of the purest forms of satisfaction. It is very important to go into nature so we do not lose sight of where we come from” eighth-grader Zhu Zikai said.

Put to the test: Keystone student achievers get accolades in local and global contests