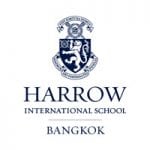 Harrow Bangkok climbed the equivalent height of the Matterhorn Mountain as part of a charity fundraiser on 1st April, which was a great success.

The aim of the fundraiser was for the children to climb the total distance of the Matterhorn Mountain (4,478m) inside Harrow Bangkok’s bouldering wall. To do this they either traversed around the wall (20m), or climbed up and down the wall (6m). There was a catch! The children couldn’t climb the same route more than once which meant they had to create a variety of their own routes at the wall. In total, the whole team collectively managed to climb a distance of 4,928m, exceeding the height of the Matterhorn!

During the event two climbers stood out by climbing for the full eight hours of the event with short regular breaks. These children, alongside the child that raised the most money, were awarded prizes from our sponsor, CMRCA, and both went home with chalk bags and vouchers for private lessons with the Chiang Mai Rock Climbing. Other prizes included passes to two climbing gyms in Bangkok called Rock Domain and Urban Climbing. Mini fitness competitions went on throughout the day which included most press ups, the longest plank and the longest traverse.

Alongside the climbing charity fundraiser, the parents and children of class 5M also got involved by setting up a bake sale stall and all the money raised, went to The Healing Families Foundation. This charity supports more than 17 families in Chiang Mai which have children with learning difficulties by teaching them arts and craft skills to enable them to earn a living.

Harrow Bangkok is very proud of its climbing team, and the facilities we have to support this, including a bouldering wall to help all our students develop their climbing skills.

The Best International Schools in Bangkok