Aid for Ukraine at IBS of Provence

The horrific events of the past couple months, during which Russia’s president ordered the invasion of its peaceful neighbour Ukraine, have reverberated around the world, leaving us reeling from the consequences. Countries, governments, organisations, even communities have begun to search for solutions, providing what they can to those suffering the effects of the ongoing war. As everyone begins to take a side, engulfed by the politics of the issue, we have not forgotten those afflicted by the atrocities most of us can only imagine.

Aunque IBS is of course in France, many of us are either dual citizens of the country, or not at all. Within the grounds are students who understand what it’s like to move around, students who wish to help in any way they can, and even students that have been directly affected. Indeed, it was a mere matter of days before the CAS council was approached with the opportunity to help, no matter how small.

Thanks to the help of an IBS parent, our school was able to organise multiple collections of supplies to be driven to the borders of Ukraine. Within just a few days, we were overwhelmed by the generosity displayed as our elected “ Ukraine room” was piled with boxes of medicine, food, blankets and more. Even as we worked through the piles, more came in.

Soon enough, it was not just supplies that were offered, but also helping hands. What began as an effort by the administration and CAS council quickly became much more, as all ages began showing up during their breaks to sort and pack what they could. Indeed, the room was often full, buzzing with enthusiasm.

In the end, we were able to complete multiple pick ups of dozens of boxes, full to the brim. No matter how small the gesture, I know I don’t only speak for myself when I say I’m glad I was able to help in any way I could, and grateful for our little community here at IBS. 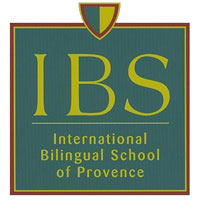 The International Bilingual School of Provence, an independent coeducational school located near Aix-en-Provence in the south of France, owes its international character to the diversity of its student population. The school, established since 1984, has both a Primary and Secondary section with an annual total enrolment of 950 students who come from more than 75 different countries. In addition to the French students who make up 50% of the student population, IBS welcomes pupils from the five continents, both as boarding and day students, while they pursue their education in English, French or both.